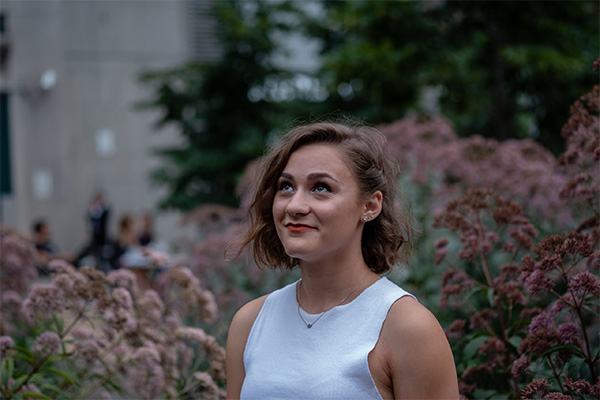 With over ten years of teaching experience and a degree in Jazz Vocal Performance from the University of Toronto, Alex specializes in teaching contemporary vocal styles including pop, jazz, R&B, Broadway, rock, folk, choral, and alternative.

Alex considers herself a well-rounded musician as she is formally trained in pop, jazz, classical, and musical theatre vocal and instrumental performance. In 2016 Alex received her bachelor’s degree in Jazz Vocal Performance from the University of Toronto where she focused her studies on vocal performance, vocal pedagogy, the psychology of music education, improvisation, composition, and orchestral arranging. During her time at UofT Alex studied with some of the world’s jazz heavyweights who have performed alongside performers such as Ray Charles and John Coltrane. Her vocal performance and teaching experiences span across many different genres of music including pop, jazz, classical, musical theatre, R&B, disco, rock, folk, and experimental/alternative music.

Alex’s teaching style caters to each student’s individually to build a strong, sustainable foundation to use for the rest of their musical lives. Alex is skilled in assessing vocal and performance issues which she then coaches student through using effective methods and exercises learned through experience and formal education. Uniquely, Alex incorporates stage presence coaching for students to learn how to express themselves successfully and professionally on stage. Students will learn microphone techniques, how to incorporate body movement into their performances, how to work the stage, and ultimately how to work an entire crowd!

When it comes to vocal students, Alex’s goal is to steer them away from trying to sound like whoever is on the radio and help them find their own unique, beautiful voice. Currently, Alex frequently performs professionally at galas, weddings, corporate events, and public events. In 2016 Alex formed the Alex Kapo Quintet which features some of Toronto’s best up and coming jazz musicians. The quintet performs at various jazz venues in Toronto, most notably at the Rex Jazz and Blues Bar, and are currently working on producing their first EP as an ensemble. Alex is also in the midst of writing, producing, and recording her very own EP. Since 2015 she has been part of numerous professional studio recordings for various albums, television shows, and movies. Her most recognizable experience has been recording vocal music for movies The Witch and In the Tall Grass, produced by Netflix, and The Terror produced by AMC.

Alex teaches students of all ages and stages of their musical lives. She ensures each student feels at ease and comfortable during their lessons; leaving feeling a sense of accomplishment. Alex believes that every student is unique and should be taught as such. She believes there aremultiple routs that can be taken to reach the same destination whether that may be expanding one’s vocal range, learning to sing runs, learning to belt, memorization, learning music theory, and anything else she or the student feels they should or would like to learn. Alex’s main goal is for her students to reach their goals, build a healthy technical foundation, explore their creativity, find and break their boundaries, and promote their musicianship so they may flourish and express themselves with ease and enjoyment through music.

Take a Trial Lesson with Alex