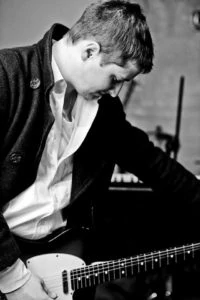 Award-winning multi-instrumentalist, Dylan Rockett, is an honours grad from York University’s Music program and a full-time musician in Toronto. He teaches guitar, bass, ukulele, and piano.

Dylan has been composing, recording, performing, improvising, and teaching music for over 10 years. Dylan is not only a musician with many hours of recording experience but also a unique artist & teacher, blending playing styles from jazz, R&B, funk, hip hop, flamenco, and rock. Dylan draws strong influences from artists who are demanding and popular innovators in their own fields such as Derek Trucks, Robert Glasper, and Joe Hisaishi. These artists’ unique compositional approach when in the studio or performing live, as well as their choice of instrumentation, timbers, musical phrasing and melodies are the elements that Dylan gravitates most strongly towards.

Ultimately, Dylan has focused on guitar as his unique source of artistic creativity since age twelve. At present, Dylan Rockett maintains multiple music teaching positions across Toronto. Dylan studies and records music at Revolution Recording, Humber College, and York University. In addition to independently co-producing his group’s debut ten track album, he has performed regularly in major venues across Toronto such as the Drake Hotel, Massey Hall, and the Sound Academy.

Dylan is a well-known guitarist, session musician, performer, and teacher who prides himself in versatility and extreme musicality. Dylan enjoys meeting new people, inspiring others, and sharing his musical talents with the world. As a teacher, Dylan instructs students ages 3-80 and is comfortable with all skill levels. What makes Dylan different from any other music teacher is his natural versatility and laughter. He is quite experienced teaching with structured methodological materials, as well as a free form with a specific structure for the student. The culmination of Dylan Rockett’s experience has led him to adopt the philosophy that music is the artistic interpretation of sound(s). And if that artfulness continues to produce an individual voice of what you believe, then it is up to musicians, writers, and artistic thinkers whose obsession with excellence may remind us all that we should be unsatisfied with mimicking the popular rather than mining the veins of creativity placed deep inside each of us.