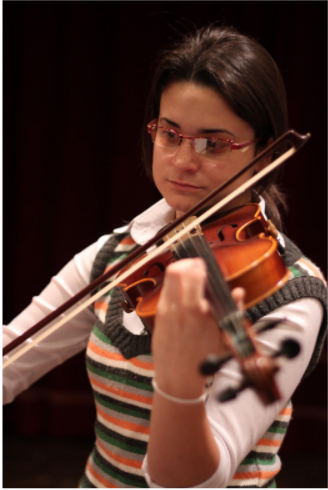 I started playing the keyboard and learning music theory when I was 6 years old. At 11, I picked up the violin and started my journey of being a musician. Since then, I trained with many great musicians and participated in several orchestras and workshops with musicians from Syria, Iraq, Lebanon, USA, Germany, Bulgaria, Russia, and Canada.

I have been a violin teacher since 2005. I worked with children as young
as 5 years old and with adults in their 30s. I have a bachelor’s degree in
music from the Damascus conservatory in Syria where I studied classical
music. I also founded several choirs for children and adults for
non-musicians as part of psychological support programs for
marginalized communities.
I realized my passion for teaching when I was a student at the
conservatory because I believed that everyone should have the chance to
be exposed to any form of music. Although I was trained as a classical
musician, I developed interest in other genres like Jazz, Rock, Oriental
music and more.
I started playing the keyboard and learning music theory when I was 6
years old. At 11, I picked up the violin and started my journey of being a
musician. Since then, I trained with many great musicians and
participated in several orchestras and workshops with musicians from
Syria, Iraq, Lebanon, USA, Germany, Bulgaria, Russia, and Canada.
After 5 years of being a student at the conservatory, I graduated as a classical violinist. I was lucky enough to study
under professor Evgueny Loginov who played a big role in shaping me to become the teacher I am today. I believe a
good teacher can recognize that each student needs a unique approach that matches their skills, interests, and goals.
Even though students have their own preference, I believe a skilled teacher should be able to work on their preferences
as well as introducing them to other styles of music. Because I worked with a wide range of ages, I am able to adapt my
teaching methods according to the age group I am working with. With young learners, lessons are more playful and
upbeat and the older the students are the more we can work on ways to express themselves through the music they are
playing.
I left my home country, Syria, after the war and resettled in Canada in 2016. Since then, I have remained in touch with
many of my students by helping and advising them online. Many have continued their professional music studies at the
Damascus conservatory and others have resumed their individual musical pursuits in Europe and different parts of the
world.
Since I arrived in Toronto, I received the Newcomer and Refugee Artist Mentorship grant from the Toronto Arts Council
to work with Linda Eyman, the director of the Toronto Singing Studio. I studied singing and choir conducting with her
and participated in her choir performances as a singer and an assistant conductor. I also passed sixth level singing
exam at the Royal Conservatory in Toronto and co-conducted Nai; the Syrian children choir for over a year.
Between the years of 2016 and 2017, I played violin with Orchestra Toronto and worked for some time with violinist
Corey Gemmelle.