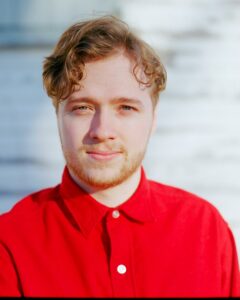 Sam is a folk musician and songwriter with a background in classical violin, also teaching mandolin and beginner guitar. With his background teaching philosophy and psychology, Sam is a thoughtful teacher who understands how to help people find meaning in music.

Sam hopes to open the eyes of young musicians to all the different directions their instruments can take them, as his own journey has taken him as far afield as hip-hop, motown, bluegrass, and others.

Not too long ago, after fifteen years of classical training including study with TSO and Tafelmusik players, Sam was growing frustrated with classical violin and getting ready to put down the instrument altogether. Then he got offered a gig playing with a 30-piece Motown band, and suddenly his eyes opened to the incredibly colourful world that exists outside classical violin. Now, Sam fiddles, picks his mandolin and guitar, and writes songs for multiple groups including Basset and My Father’s Son, touring across Ontario.

Sam wishes that eye-opening moment had come earlier in his musical education, and hopes to inspire young musicians by showing them all the different styles their instruments can fit into.

As an instructor, Same has experience in various fields and with all ages, including teaching philosophy at the University of Toronto and instructing athletics with the City of Toronto, and has picked up all kinds of techniques and instincts all along the way. As someone who always pushed a bit against the established and formal way he was taught, Sam knows the value of taking joy in music rather than making it just another class with tests and exams, wherever that may lead.

Sam specializes in folk improvisation and rhythm playing, particularly old-time and bluegrass on the mandolin and fiddle, and also teaches classical violin and beginner guitar. All the same, he constantly finds himself in new genres and is always happy to dive in and figure out how it works. He works with students of all ages from 5 to 50.

Book a Trial Lesson with Sam