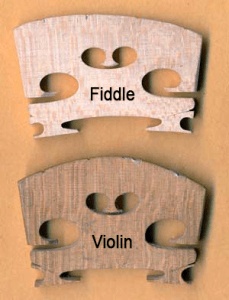 Violin vs Fiddle: What’s the Difference?

If you’ve ever taken a violin lesson (or plan to), you might have asked yourself: “Violin vs fiddle: what’s the difference?” We get asked this question quite a bit. The answer is somewhat surprising for many – they are the same instrument. So why do we call one a fiddle and one a violin? For the same reason an Appalachian fiddle player might refer back to the violin that’s been in his family for generations, or the first chair violinist of the Toronto Symphony Orchestra might call her instrument a fiddle – it’s mostly colloquial.  Although, there can be some minor differences between the bridges, string materials, and playing technique.  Those differences make a whole lot of difference!

Enroll in our online Violin lessons, or take in-studio lessons if you’re in Toronto!

What is a Fiddle?

Both the violin and fiddle are four-stringed, treble clef instruments that one plays with a bow. It becomes a fiddle when it is used for non-classical applications, like bluegrass, country, and folkloric music. There are many regions around the world that have fiddle styles, even several in Canada, like the French Canadian “crooked tunes.” You can hear many of the different fiddle styles in some of the neighbourhoods, street corners, and subways around Toronto.

Fiddles allow for the expression of the player’s personal interpretation of the music. It is the instrument of choice for improvisation, syncopated bowing patterns, and the double and triple stops that punctuate a lot of folk music around the globe.

When using a fiddle, players will often swap out their standard bridge for one that is a little flatter, to allow the fiddler to slide across more notes with the bow, as is common in a lot of the music styles fiddles are used with.

In some traditions, like Appalachian music, some old-time musicians may hold the fiddle just below their collarbone as opposed to under their chin. This technique was also used during the Baroque period.

What is a Violin?

Violins are primarily used for classical music, though it can be used to accompany jazz, and yes, some folkloric music as well. Confused? It boils down to the style of playing. A violin player is more bound to the music they are playing, there is not as much room to improvise like a fiddler would – even with folk music, the violinist adheres to the music as it was composed.

Violin music also aims for a cleaner sound, bowing one note at a time, instead of two or three. For this, a higher-arched bridge is ideal. Since bridges are easy to swap on the instrument, a musician needs only to have two bridges to go between fiddle and violin.

Most violin lessons are strictly classical, even here in Toronto. However, it is possible to find teachers who can incorporate fiddle-style playing into the lesson.

There may also be a difference in the string selection. For violin, synthetic strings are often preferred, with an unwrapped steel E string on the end, requiring a fine tuner. The violin is tuned to perfect fifths (GDAE).

Fiddle players typically use all steel strings and rely on peg tuning as well as a fine tuner. Their tuning depends on the music they are playing. Perfect fifths work for many applications, but variations are required for many of the folkloric traditions the fiddler might be playing.

It is the player’s technique, style of music, and the purpose for which the instrument is used that truly makes the difference between these two bowed instruments. The physical differences are merely modifications to accommodate the different styles.