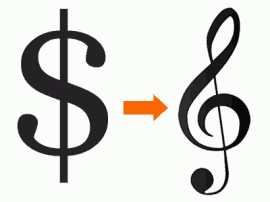 Free Exposure for Your Music or Exploitation?

With years of music lessons under your belt, there comes a time when you might find yourself ready to start performing. While open mic nights are a great place to start, the promise of your first “real” gig might seem like a tempting opportunity to get exposure as a musician. Even if you don’t get paid, at least people will hear your music.

Many of us have learned the hard way: free exposure is nothing more than a sugar-coated way of getting away with exploiting talented performers. Think of it this way: if you’re good enough to be noticed by event organizers and promoters, aren’t you good enough to be paid? Consider the amount of money you spent on music lessons. The time and energy that goes into daily practice and rehearsal. The amount of equipment needed to perform. All of these costs add up, and that “free” exposure opportunity winds up costing a pretty penny.

Musicians who want to tour and perform can do better. If you want your music to be taken seriously, you need three things:

Those open mic nights were for you; they’re a good way to have fun and play for an audience to build your skills as a performer. Once you are approached to play a gig, you’ve crossed into the territory of being a professional musician. At this point, you’re more than a musician: you’re a business, and you need to be savvy. Now, imagine walking into a pizza place, asking for a free pie and telling them that they’ll get good exposure because you’ll walk around Toronto with a pizza box in your hand. After all, not many people in the city have tasted their pizza, so it’s a good deal for the pizzeria, right? Most likely, you’ll get laughed right out of the store.

As a businessperson, you can do the same to promoters asking you to play for free. That lack of income, when compared to your expenses, means a loss for you. It takes away from your opportunities to record demos, get professional photos taken, take advanced music lessons, seek promotion and go on tour.

When you do say no, you’re not just refusing to be exploited. You’re standing up for all artists who have performed for free to a large crowd, with little opportunity to promote themselves and advance their musical career. When you let promoters know that asking talented musicians to perform for free is not acceptable, you do everyone a favour.

Promoters often use persuasive tactics like telling you that you don’t have an established reputation or that you are a risk to them; don’t buy it. Appreciate that they noticed your talent, remind them that they approached you because they obviously thought your music was suitable for their audience and let them know that you don’t work for free anymore than they do. Like anyone else, musicians need to make a living too.

Some musicians might want to perform for free at a charity event. This is a choice the musician has to make for themselves. However, charities should not expect to have their entertainment play for free. Entertainment is an expense that needs to be included in their budget and worked into the cost of the event ticket or fundraising goals.

The bottom line is this: if a festival, venue, promoter or event can not afford to pay a musician to perform, maybe they should rethink their business model. Because, if you start performing for free, you’ll certainly have to rethink yours.