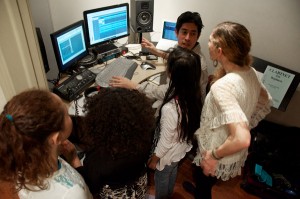 Home Recording Tips: How to Record a Synth or Keyboard

Affordable multi-track recorders made recording keyboards, guitars, drums and microphones affordable in the 1980s. Aspiring street level musicians everywhere discovered they could buy a recording device to capture their music demo. Tascam was one of the first companies to popularize home recording with its four-track analog recorders. Since then, Korg, Roland, Yamaha and other companies have joined in to produce analog, and then digital, multi-track mixer-recorders. Today, more desktop musicians opt for a software-based recording program like Cubase LE.

The basics of stereo recording remain the same with either a standalone digital recorder or a software program. The keyboard, synth or piano — yes, one doesn’t necessarily mean one or the other nowadays — should be connected to the multi-track recorder with good quality quarter-inch audio cables before anything is powered on. If a synthesizer workstation is being used, there’s no need to worry about a MIDI cable. If additional synthesizers like drum machines are used for rhythm patterns, a MIDI cable needs to connect the MIDI OUT port in the back of the master instrument to the MIDI IN port on the slave instrument so both clocks are synchronized.

Setting Up To Record

One recorded stereo track requires two audio cables for proper left and right panning. Most keyboards have two quarter-inch audio outs, or jacks, in the back, which connect to the stereo ports on the multi-track recorder. For full left and right stereo, at least four cables should be plugged in. Smaller four-track recorders usually have two auxiliary or AUX ports which can be used to plug in one more instrument, like a drum machine. If the recorder offers eight-track or sixteen-track capability, another instrument or two can be plugged in.

If outboard multi-effects devices for compression and reverb are used, an additional pair of audio cables is required for every audio output/input. Instrument cables plug into outboard devices and those plug into the recorder. Also try to keep electrical cords spaced apart because their proximity can result in an undesirable buzz or hum.

Like Cubase, an audio interface like the Alesis MultiMix 8 USB 2.0 mixer works well. The MultiMix provides a low-latency platform with 24–bit/44.1–96kHz recording straight into a PC. Like other mixers produced today, it boasts one hundred 28-bit quality stereo effects like reverb, delay and compression to take advantage of. The MultiMix also provides eight separate line inputs for instrument stereo panning and two additional master mix inputs.

Once everything is powered on, check the levels on all the instruments by triggering sounds of varying intensity up and down the octal spectrum. The best way to do this is with a pair of good quality Boss or Sony headphones. Raise or lower the volume on each machine to avoid distortion and sonic anomalies. Once everything sounds good, increase or lower the master volume control on the recorder or interface for personal comfort.

Some musicians like to record everything dry, which is jargon for sans effects. Many synth sounds are also pre-programmed with filtering and effects, too. Filter manipulations alter the character of a sound to make it brighter or louder or the opposite. This can also be done with recorded sound. Additional effects can be tapped to sweeten the tracks. Independent effect and volume levels from keyboard or piano tracks can be edited on the PC. Software programs offer waveform visualization so effects levels can be seen as well as heard. Standalone digital recorders also have effects which can be added in post.

Whether the goal is to produce a music demo for a label or to record an independent project, the best part of recording at home is that it’s lots of fun. Once upon a time, musicians had talent to spare but lacked funds to buy expensive equipment to record. Nowadays, it takes far less money to set up a complete home recording studio.