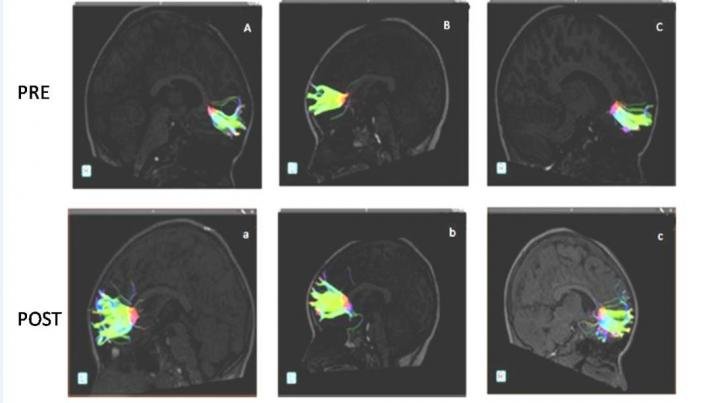 Music Lessons Can Help Children with ADHD and Autism

We’ve written about the benefits of music lessons for kids with ADHD (Attention Deficit Hyperactivity Disorder) and the potential musical genius of autistic children before. While these benefits are common knowledge among music teachers and well-informed parents, a new study helps us understand exactly how the brain changes and where these new fibre connections are occurring.

While we’ve been telling parents that music lessons can help their child’s symptoms from ADHD or autism for years, researchers finally have the physical proof. Learning to play a musical instrument increases the number of connections in the brain after just nine months of practice!

The researchers from the Hospital Infantil de México Federico Gómez in Mexico City looked at 23 healthy children between five and six years of age who hadn’t taken any music lessons before. All of the children were right-handed and had no history of sensory, perception or neurological disorders.

Each child was given a brain scan, using diffusion tensor imaging (DTI) – an advanced MRI technique which scans the brain’s white matter. This white matter is made up of millions of nerve fibres called axons, which connect the parts of the brain together. DTI scanning measures the movement of water molecules along these axons, which can point out if the child has brain development issues or not. As a child’s brain grows and matures, connections between areas of the brain improve, and the movement of water molecules increases.

Previous research has linked autism and ADHD with a decrease in fibre connections and in the movement of water molecules. However, after nine months of music lessons the children were scanned again and the scans showed improvements in the movement of water molecules along the axons as well as the length of the axon themselves. Essentially, the connections between the different parts of the brain grew stronger.

This study provides further proof that learning music at an early age optimises the creation and establishment of neural networks while stimulating existing brain tracts. When a child receives a musical education, his or her brains is asked to complete certain tasks involving hearing, motor, cognition, emotion and social skills. Activating these areas of the brain stimulates better connections between the left and right hemispheres.

The researchers saw a marked improvement in the area of the brain known as the minor forceps, which is particularly underdeveloped in children with autism and ADHD. Even though the study was performed on children without the condition, the researchers believe that the results of their study could help create more accurate treatments for disorders such as autism and ADHD.

Elite Music Academy recognises the benefits of music education for children with special needs. We have dedicated teachers with the right experience and patience to help them succeed. Typically, we recommend children with ADHD and autism start with piano or drum lessons. These instruments offer more instant gratification which helps motivate kids to stick with their lessons long-term.