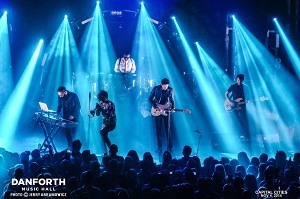 Do You Have What it Takes to Play at The Danforth Music Hall?

The Danforth Music Hall has been a mainstay on The Danforth since its construction nearly a century ago. It started off as a movie theatre in the early heyday of the motion picture and stayed that way for over sixty years, before it began featuring live performances, earning the moniker of “music hall”. After another stint as a movie theatre, the stately vintage theatre served as a set in main stream movies (including Chicago). After a brief closure in 2010, the theatre re-opened as a thriving destination for the very best indie music Toronto has to offer.

This mid-sized venue maintains an intimate feel and it’s one of the most popular places in Toronto to hear great live music. The stage has played home to a consistent slew of top indie artists and mainstream players, with the likes of Rihanna, Capital Cities, Gogol Bordello and Mother Mother, to name a few. Patrons prefer its sloped floors and phenomenal acoustics over larger venues like the Air Canada Center.Do you have what it takes to make it on this stage? Toronto is competitive, and a venue of this caliber requires a high degree of professionalism as a musician. The calendar at The Danforth Hall of Music is packed well in advanced, so you will need to plan far ahead. Potential performers should already have a sizable fan base, for The Danforth Music Hall takes some serious street cred to fill its 1,145 seats. Of course, it would be even better if you have enough of a draw to meet the standing capacity of 1,427 (which includes the 90 mezzanine slots and 279 balcony seats).There are several perks to playing at this historical landmark. The venue promotes upcoming artists through social media, their sizable mailing list and their light-box on Danforth Ave. Even though the venue is a mid-sized, it has all the features of a larger venue, with ticket sales through Ticketmaster, a great stage, professional lighting, and high-end sound equipment. Your fans will enjoy the fact that The Danforth Music Hall is fully licensed with 4 bars, serves snakcs and is easily accessible from the TTC, just steps from Broadview Station.Of course, as with any other venue, there are some considerations before booking a show here. Your set should be long enough to leave room for the mandatory intermission. In addition, you’ll need to pay a 50% deposit and a damage deposit when you sign the venue license agreement. Performers also need to be backed by at least a $5 million liability insurance.

Think you’ve got what it takes to get one of Toronto’s most historical stages? For information about booking, you can visit The Danforth Music Hall’s website and use their contact form. Not sure your playing is quite up to speed to play a venue of this magnitude? With some music lessons at Elite Music Academy, you can tighten your technique and build on your talent to score a gig of this caliber.

Whether you are taking Guitar music lessons, Bass lessons, or Ukulele lessons, in your music school, tuning can seem like a stressful and tedious task to  complete, leaving you confused and frustrate

“Can I sing?” This is a question many of my students ask me at our first lesson together. Piano students don’t often ask if they have the ‘capability to play’ the piano. Guitar students rare