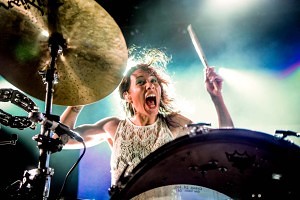 Where Have all the Girls Gone? Why Few Females Take Drum or Bass Lessons

In the year 2013, girls are much more empowered in music than they once were. Still, many remain reluctant to embrace instruments like the bass guitar or to take drumming lessons. Despite the breakthroughs in the music world, there are still not many girls picking up these instruments at young ages. The perception remains that the notoriously gender-biased music industry has little room for a girl who can rock the bass or drums, particularly the pop industry. The problem isn’t necessarily just the music industry though. Girls might fear not being feminine, their parents may not want their daughters’ to rebel, and the scrutiny that a female player faces is an overwhelming challenge presented by those who feel threatened by their intrusion into the boys club. Quite frankly, the thought of succeeding in these instruments is scary to many girls and their parents.

It was once understood that to maintain a good reputation and succeed, female musicians should be piano players, singers, or acoustic guitar players. They should also be young, thin, and beautiful. Today’s generation does not have the likes of The Go-Gos or The Bangles to look up to for inspiration to do all that and rock out. The best pop music has to offer are rebellious pop stars who still fit the feminine mould, even as they push the boundaries and expose the double standards. Even when they do this, they are held to impossible double standards. As Gwen Stefani sings, “Your moment will run out because of your sex chromosome”.

These stereotypes understandably break down somewhat in the alternative scenes. Girls are allowed to rock out within reason in rock and alternative music. Smashing Pumpkins was particularly known for having several female bassists: Melissa Auf der Maur, Nicole Fiorentino, and Ginger Pooley all played bass guitar under Billy Corgan. Female-fronted bands like Hole and Veruca Salt also brought in women to do the heavy lifting. Though this paved a new path for women to pursue, it did not offset the stereotype; it happened in a self-contained subgenre. What about women who wanted to play another type of music?

Society teaches young girls that to be a musician, they are supposed to be the pretty face at the front with a great body and passable musical skills. Their role is not to be the talent in the back of the band holding the band together with a solid beat with a swanky drum kit. “Good clean girls” should take music lessons in piano and violin and focus on classical or jazz music. There is no guitar in an orchestra and to break into rock and pop is still seen by many cultures as rebellious.

Girls often gravitate towards music lessons based on this idea. Whether they want to play it safe in a symphony and they stick to violin, or they want to be a singer-songwriter on piano, they know that they are not going to be held up to the double standards and scrutiny that so many women face. Some girls pickdrums or bass because they perceive themselves as not being “girly girls”. They are not after glamour – many of them don’t want to be seen at all. But this does not mean that girls who play other instruments are not feminine. It’s just the flip side of the same tired gender role stereotype.

Young female musicians are not alone in dissuading themselves away from these instruments. Sometimes it is the parents who frown at the thought of their princess playing drums. They are more likely to encourage piano or vocals before they will agree to music lessons in bass. Whether they don’t want their daughters to struggle through the music industry and struggle to find a seemingly rare niche or because they themselves have an ingrained idea of what it means to be a female musician. Regardless of where the reluctance comes from, it continues to impact the music industry.

Notably, female drummers are essentially laughed at until someone realizes they can play. People say things like “Wow, did you see Lenny Kravitz’s drummer? She’s gorgeous and she’s actually pretty good!” Simply because Cindy Blackman is a woman, her talent gets undermined before it is acknowledged. Many female drummers have reported being teased in school, being grilled at music stores, and being scoffed at by other drummers who perhaps just felt threatened. These are the attitudes that women continue to conquer around the world in multiple industries – not just drumming or music.

These attitudes are not going to disappear tomorrow. But, the more they are challenged, they less dominant they become. There are plenty of role models today who have broken all of these stereotypes. There can be even more in a few decades, if we encourage girls to pursue the instruments of their choice and encourage them to be what they want to be, even if it seems like an oxymoron to them to be a feminine drummer or a pretty bassist with incredible talent.