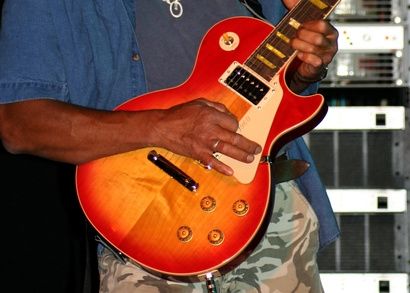 In this guitar lesson, we are going to discuss funk guitar, specifically the art of strumming. Whether you love funk or have never listened to it before, it is an extremely valuable genre to be able to play.

The first question is what kind of chords should you play. The fun thing about funk is that songs will very often revolve around one or two chords. Some of the more popular choices for chord qualities are 7s and min7s. The prototypical funk chord, as inspired by James Brown, is this famous E9 chord:

For the first voicing you will use (from top to bottom) fingers 2, 1 and then a barre with 3. The second voicing is the same, simply a little sparser. Finger this voicing with 2, 1, 3 and 4. These shapes are movable and can be used to play any other 9 chord (not to be confused with a Maj9 or Min9). You will come to find it is a very useful voicing.

Don’t be intimidated by the name. Many players are often deterred once they start hearing 9, 11 or 13, but the concept is relatively simple. In this case, the E9 is an embellished form of a 7th chord. That means wherever you see a 7, a 9 can stand in as a more colorful way to play it.

Now that you have this chord under your fingers, the next ingredient is the strumming. While not always the case, a lot of funk grooves are based on sixteenth notes. Sixteenth notes are 4 notes to a beat, counted as 1 e & a 2 e & a etc. What you will be doing is strumming a constant stream of 16th notes, alternating down and up strokes.

Start by playing 16th notes with the strings muted. If you aren’t familiar with this technique it is relatively simple. Make the E9 chord, then lighten up your finger pressure so that you aren’t actually pushing the frets all the way down. When you strum you will get a nice percussive effect. In this example you would be playing the chord on 1, 2, 3 and 4 with mutes (represented by ‘x’s in between:

If you are having difficulty getting 16th notes down, try using a metronome at a slow tempo. You will notice that while this groove is starting to sound funky, it needs a little something extra. There is two things we are going to do: funk up the rhythm and introduce the E13 chord. The combination of the E9 and the E13 chord is a sound you have probably heard quite a bit. This is a common version of the E13 chord:

You can use this chord anywhere where you would use the other two. You can switch to it mid groove or play it in the next bar. Even though a song might only revolve around one chord, you can use inversions to make things more interesting. It is important to experiment with all the combinations of chords and rhythms you can think of. In the time between guitar lessons you have to learn how to be your own teacher.

With these three chords you now have access to an arsenal of funky riffs. These E9/E13 grooves are great to solo over as well. In your next guitar lesson try swapping leads with your teacher. Some effective scales for these grooves include E Minor Pentatonic, E Blues, E Major Pentatonic and the E Mixolydian scale. Stay relaxed and have fun with it.